“Welcome to the Vanity Fair! A world where everyone is striving for what is not worth having”, warns the Narrator in the opening of each episode of the 2018 ITV and Amazon Studios series. Daring from the very beginning (illustrated with Bob Dylan’s «All Along the Watchtower», played by Afterhere with a very contemporary sound), the series combines an impeccable period drama style and perfect cast with the interesting narrative techniques and dialogues with the reader which are famous in Thackeray’s novel. The fair is also associated from the initial scenes and until the end of the series to the metaphor of the carousel. Therefore, there are at least five reasons to watch the series.

1. The Cast. The cast is impeccably chosen and especially the protagonist is (surprisingly for such a famous character where seems to little room for originality) fresh and genuine, filling the part in the minutest of details, such as the French accent or very expressive ways of suggesting Becky’s intrepid and versatile nature as well as her sarcasm or hypocrisy. Olivia Cooke brings spontaneity and freshness to a character that can be challenging through its famousness, both as a literary and as a film character. She manages to create an impeccable Becky, original and different from the equally good role made by Reese Witherspoon. 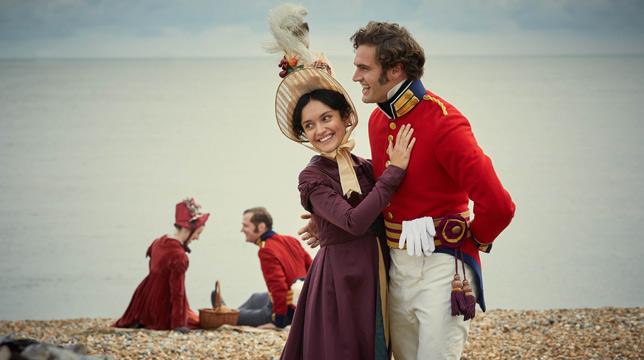 2. The Direction. There is an attempt to bring freshness and novelty to the directing of the series. This stands out from the opening scene, recurrent in all the episodes, in which the Narrator/ Thackeray welcomes the audience to the Vanity Fair and until the final scene, different from the novel, in which we see the characters joining the carousel (the metaphor persisting through the series), with the Narrator commenting in an upset tone that nobody was supposed to have fun in the Vanity Fair.

3. The Setting and Costumes. This comes as no surprise because being a period drama we could anticipate some flamboyant Regency outfits. However, the manner in which they are treated in detail and adequate to the changes that occur in the status of the characters (such as Becky’s rise or Amelia’s downfall in terms of social position) is most convincing and aesthetically impeccable (this would be the word that could best define this adaptation). 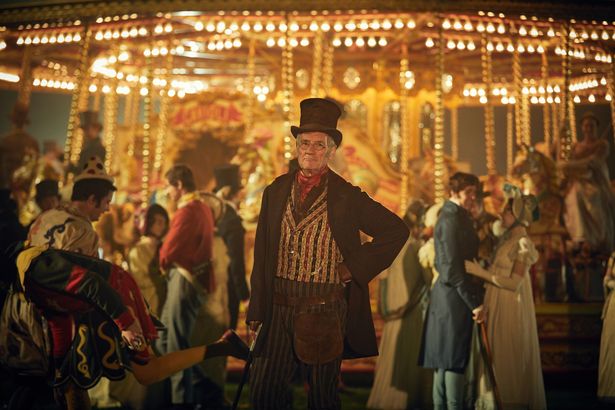 4. The Music. This is the daring element, although from Sophia Coppola’s Marie Antoinette to Versailles or Medici: Masters of Florence, the insertion of contemporary themes into period dramas seems to become increasingly common. In this case is not just the sound of the opening theme but also the lyrics, that perfectly suggest the metaphor of the “Vanity Fair”: “There must be some kind of way outta here/ Said the joker to the thief”

5. For Revisiting a Classic. It goes without saying that Vanity Fair can stand next to Pride and Prejudice, Wuthering Height, Tess or other 19th century major classics in terms of a continuous interest in adaptations, both for the cinema and television. The fascination with these works seems never to cease and with the advances in both filmmaking and technology, there is an inevitable interest in revisiting these iconic literary works. However, the fame and general knowledge of the audience with the plot and characters only make it the more difficult with every new attempt, due to the inevitable comparisons. As with sequels, some new attempts have suffered when compared to one or another iconic version (see, for instance, the famous 1993 BBC Pride and Prejudice). But in this case, we have a winner, despite the great predecessors (such as the above-mentioned Witherspoon version), as it is both delightful, impeccably played and historically accurate.