By no means uneventful, the very recently broadcasted second season of The Crown is most striking at the narrative level, which becomes more complex towards the end of the series. Starting with a major family crisis in 1957, the season covers a few intense years, which affect the Queen personally but also prove challenging for the Crown. Despite described in very different, but nonetheless difficult situations (war, political instability, vulnerability of Monarchy but also imminent family breakdown and multiple pregnancies), Elizabeth’s character (counting on Claire Foy’s enhanced and increasingly complex performance) is somehow overshadowed in this season by Philip’s. Not only is he the protagonist of more than one major scandal which almost shakes the image of the Monarchy, but the depth of the character is revealed, through the complex narrative technique anticipated above, in a few childhood episodes, most strikingly in one episode that parallels Philip’s and Charles’s experiences in a most challenging (and we could say traumatizing) educational context. 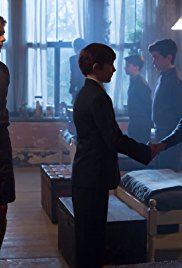 Thus, the first episodes focus on Philip’s “misadventure” (as the series calls it in an episode title) during an extended tour, accompanied by male fellow members of a rather ambiguous club. The flashbacks – extensively used during this season – reveal a harmonious atmosphere in the royal couple before the prince’s journey, despite a suspicion of an affair and a large amount of time spent in the above mentioned club.

However, the trip proves to evolve in an increasingly risky manner, both for the personal happiness of the family and for the image of the Crown. The reason is not so much Philip’s absence for a few months – even in events such as Christmas – but stands more in the freedoms assumed by the group of men, when visiting “exotic” and paradisiacal islands, of which the Prince’s closest friend and employee, Mike Parker, sends detailed accounts to their club in London. These letters finally get to the hands of Parker’s wife, who was increasingly unhappy with the marriage and was seeking for a divorce. Despite pressure or requests from the Queen and her staff, who were keen in preventing the divorce and the unhappy press associations between Parker’s and Philip’s behavior, the divorce could not be avoided and the press headlines eventually strike unmercifully. However, for their own marriage, as Elizabeth puts it explicitly, divorce was not a solution (“ever!” – as she emphasizes) so she seeks for a solution (and a price) to keep Philip “in, not out”. His request is a higher royal title and status, as he feels his current status is insufficiently satisfactory in comparison to his wife and son, the Prince of Wales.

Philip’s background and traumatic personal history is revealed in a few occasions, from an interview which he suddenly interrupts because of the questions that refer to the serious health or political problems associated to his parents and sisters, to an episode dedicated to depict some traumatic events in his childhood. Thus, in what can be considered the most creative episode in terms of narrative strategies (Paterfamilias), we see Philip insisting – to the extreme of threatening Elizabeth with the divorce – for Charles to attend his former school. This proves to be not only a “prison sentence” and “hell” for Charles but is also revealed to have been a traumatizing experience for Philip himself. However, his attitude reveals that he felt that the harshness of the experience of this Victorian-like institution – aggravated by a major personal loss – had helped his become stronger and this is what he also expects from his sensitive son. The pressure laid on Charles is obviously overwhelming and the results disastrous, the episode closing with an explanation that when he became a father himself, the Prince of Wales chose Eton for his sons. Again, the techniques used by this episode move towards the cinematic area, surpassing the conventions expected from such a series and enhancing the psychological effect. Thus, Philip, “the mystery man”, becomes the actual protagonist if not of the entire season at least of some significant episodes.